“The RAGE receptor inflammatory pathway plays an important role in the etiology and progression of peripheral artery disease (PAD), especially in diabetes. Chronic activation of RAGE suppresses the ability to create new blood vessels resulting in extensive tissue damage due to a decrease of oxygen and nutrient delivery. By blocking the activity of RAGE, we hope to prevent its pathological effects and have the ability to impact the disease process itself” explained Dr. Lynne Johnson, Chief Scientific Advisor and co-inventor.

In this diabetic model, the femoral artery of one leg is occluded with a balloon catheter to prevent blood flow to the tissues, representing peripheral artery disease associated with diabetes. The non-occluded leg allows for assessing the effects of diabetes alone on blood flow.

Studies from the first phase examined the effects on the PAD aspect. Dosing with CR-3 increased the generation of new capillaries, improved overall arterial health and restored blood flow by 81% compared to the PAD diabetic animals. In the current phase, CR-3 restored tissue blood flow in the diabetic treated group to the same level as non-diabetic animals, whereas blood flow was decreased by 54% in the untreated group.

“We were very surprised to see that CR-3 had this beneficial effect in the diabetes alone model system within such a short period of time “ stated Ihor Terleckyj, Ph.D. and CEO of CuRAGE, “This new data further substantiates moving forwards with the development of CR-3 for human use”.

According to Douglass Greene, M.D. and Chairman of CuRAGE’s Medical Advisory Board, “RAGE is a promising therapeutic target to improve PAD and other cardiovascular outcomes in diabetes, but pharmacologic inhibitors of this pathway have not yet entered clinical practice.  CuRAGE has identified and developed a novel, first-in-class anti-RAGE agent that blocks ischemia-related inflammation, improves compensatory angiogenesis, and robustly increases peripheral tissue blood-flow in both a large and small animal model of diabetic PAD. These studies portend a potential breakthrough therapy for diabetic patients with PAD and critical limb ischemia to prevent the devastating limb loss and improve vascular outcomes.”

CuRAGE Therapeutics is an early-stage biotechnology company formed in October 2018 headquartered in Berwyn, PA with technology licensed from Columbia University. Our mission is to develop novel therapeutics in overlooked disease states with high unmet patient needs. We are currently developing a humanized anti-RAGE (receptor for advanced glycation products) monoclonal antibody CR-3 that blocks the activity of an immmuno-inflammatory pathway contributing to chronic disease development. Our lead indication is peripheral artery disease where CR-3 monoclonal antibody has demonstrated the ability to restore blood flow in both diabetic mouse and pig models of disease.

The worldwide estimate for patients with peripheral artery disease is 202 million, with 9 million in the US. The quality of life for PAD patients is poor. Due to reduced blood flow to their lower limbs, patients have reduced mobility and pain while walking or at rest. As the disease progresses, patients may require endovascular procedures or surgical bypass grafting. PAD will reach an epidemic status by 2026 due to the increase in the aging population and rising rate of diabetes. Annual US medical and hospitalization costs for PAD exceed $62 billion.

Currently, there is no therapy that has been designed specifically to impact disease progression based on understanding the underlying pathological mechanism that leads to the development of PAD.  Statins, anticoagulants and anti-platelet agents have a large effect on reducing mortality, yet have little effect on reducing the need for vascular procedures, promoting wound healing and preventing limb amputations. 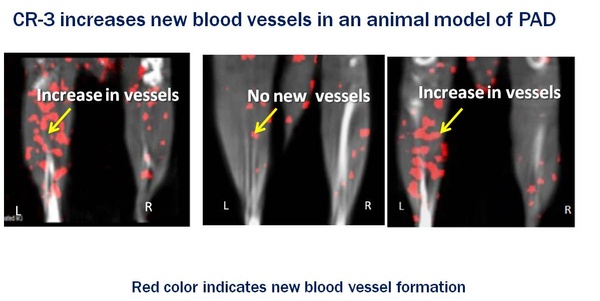